Robin of Sherwood – The Knights of the Apocalypse 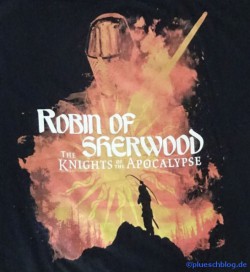 Until now we didn’t have any reviews about audioplays in our blog. That is going to change today, because who doesn’t remember the legendary show of the Eighties: Robin of Sherwood?
I must confess, not many people I know, but that doesn’t seem to be representative. There are enough people out there who grew up with their adventures and love them. You don’t believe me?
Then you either won’t believe me that last year, thirty years after the show was cancelled, there was an announcement to revive the series with the original cast for an audioplay.
The financial goal was reached in no time. Better than that, the goal was doubled on the platform.
And this is something you can believe or else I wouldn’t have something to write about.

It’s a sign that I can’t be the only one who is still loving the show since childhood. I loved Nasir, the first and the best Saracen ever, who was a member of the Merry Men.
I think that “Robin of Sherwood” stands the test of time. The mixture of Adventure with a bit of Fantasy, astonishing swordfights, paired with Clannads Soundtrack have created a jewel on the TV screen. The show even survived the change of the leading man. Not only for the fans this show seems to be something special but for all the actors as well. All rode back to Nottingham without hestitation. 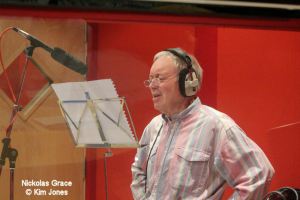 “The Knights of the Apocalypse” is based on a script by the late Richard Carpenter, the creator of this incarnation of the famous outlaw. The story takes place after the third season and continues the adventures of the Merry Men. They don’t have to fight the Sheriff of Nottingham (Nickolas Grace amazing and grumpy as ever) alone, but the Knights of the Apocalypse as well. The Order tries to increase power and Gold and when Robins Father gets drawn into it, it’s getting personal. Robin and his friends have to battle tyranny and injustice once again. As they ever did.

I missed Richard O’Brien when the story tends towards the supernatural. His Gulnar has used Witchcraft before to fight the beloved outlaws. Anthony Head and Colin Baker (he’s coming back to our Blog in October) are as good in making the life for the heroes difficult.  Terry Molloy, who was in the Blog last year, plays different parts and even helps Arthur the Rat to his cameo in the audioplay. Really all castmembers are back. ;- ) 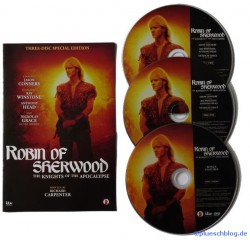 As soon as the theme music plays, one is immediately drawn back into Sherwood Forest. And everybody looks like they did in the Show. :- ) Except Guy of Gisburne. Freddie Fox took the part of the late Robert Addie. Robert Addie was a baddie who the viewers loved to hate. The perfect Antagonist. Freddie Fox is too young and sometimes too nice, at least in my ears. However this is the only criticism. This adventure combines the accustomed mixture of Adventure and Fantasy. The beloved voices, supported by the music and accompanied by the sound effects ressurrect the magic of the show. And who would ever have ever expected new adventures of this green archer? I surely didn’t.
Everybody who wants to saddle their horse and ride into a new adventure with the Wolfshead can find more information on this website: Spiteful Puppet.

“The Knights of the Apocalypse” is proof for one of the most famous quotes of the show: “Nothing is forgotten. Nothing is ever forgotten.”

This website uses cookies to improve your experience while you navigate through the website. Out of these, the cookies that are categorized as necessary are stored on your browser as they are essential for the working of basic functionalities of the website. We also use third-party cookies that help us analyze and understand how you use this website. These cookies will be stored in your browser only with your consent. You also have the option to opt-out of these cookies. But opting out of some of these cookies may affect your browsing experience.
Necessary immer aktiv
Necessary cookies are absolutely essential for the website to function properly. This category only includes cookies that ensures basic functionalities and security features of the website. These cookies do not store any personal information.
SPEICHERN & AKZEPTIEREN
Zum Ändern Ihrer Datenschutzeinstellung, z.B. Erteilung oder Widerruf von Einwilligungen, klicken Sie hier: Einstellungen